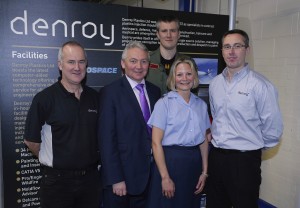 DENROY Plastics, based in Bangor, has welcomed Flt Lt James Milmine, Pilot 1(F) Squadron, RAF Leuchars, the pilot of a Typhoon Eurofighter fighter plane to their Balloo Road site to celebrate the fact that Denroy has won a £1 million new contract to supply further components.

Denroy now supply 180 separate parts into the Eurofighter, the most plastic parts supplied by any single company in the world.

The visit, will also have the pilot visit Denroy, and explain to staff how the parts they make are utilised in the aircraft. Further to the visit, staff and management will visit RAF Aldergrove, to see the plane for themselves.

Denroy chairman John Rainey said this is a massive honour for the company, and added that the new order sees the business look forward to the future with considerable confidence.

“Denroy makes plastic moulded products for a massive range of clients, from our world leading Denman brand of hairbrushes, to medical devices and components for the manufacturing and aerospace sectors.

“We are delighted to have received both this welcome new order, and especially to welcome a pilot of the Eurofighter Typhoon fighter aircraft.

“I know that it¹s great for our staff to hear how the plastic components they make are utilised by the RAF, and other air forces that use the Eurofighter. I hope that the Typhoon pilot will have gotten a kick from seeing where essential components of the aircraft are manufactured.”

The Eurofighter Typhoon is a multi-role combat aircraft, capable of being deployed in the full spectrum of air operations, from air policing, to peace support, through to high intensity conflict.

Typhoon provides the RAF with a multi-role combat aircraft, capable of being deployed in the full spectrum of air operations, from air policing, to peace support, through to high intensity conflict.

The Typhoon was introduced into operational service in 2003. Currently, the type has also entered service with the Austrian, Italian, German and the Royal Saudi Air Forces. The Royal Air Force of Oman been confirmed as an export customer, bringing the procurement total to 571 aircraft as of 2013.

The Typhoon saw its combat debut during the 2011 military intervention in Libya with the Royal Air Force and the Italian Air Force, performing reconnaissance and ground strike missions.

The type has also taken primary responsibility for air defence duties for the majority of customer nations.

Denroy Plastics Ltd, which employs 160 people at its Bangor plants, is part of the Denroy Group which also includes the world renowned Denman International hair-care range.

One of Northern Ireland’s most innovative and successful businesses, Denroy has a history which dates back 40 years, and a future which has been enhanced by its recent achievement of SC21 status, and growing expertise on the European Research and Development landscape.

Denroy has been moulding plastics since 1972 and during that time they have designed, developed and manufactured products for the most diverse uses and applications.