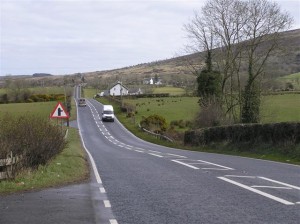 A man injured in a road crash on the Derry to Coleraine Road earlier today has died in hospital.

The man was fatally injured in a collision between a Peugeot 306 car and a Volvo lorry on A37 Broad Road outside Limavady at around 2.15 pm this afternoon.

A male passenger in the car was was injured and taken to hospital for injuries which are not thought to be life-threatening.

The Broad Road remains closed and diversions are in place at the Cashel Road and the Dunhill Road junction.

Diversions are also in place at the Killane roundabout and motorists are advised to expect delays in the area.

Police have appealed to anyone who witnessed the accident or who was travelling in the area at the time to contact Limavady Police Station or the Collision Investigation Unit at Steeple Police Station on 0845 600 8000.


One Response to MAN DIES IN TWO VEHICLE CRASH