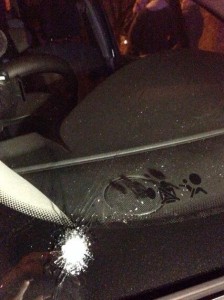 The PSNI revealed today that a bomb attack on Friday night on a police patrol in west Belfast was detonated by command wire.

The armoured landrover was passing Belfast City Cemetery on the Falls Road around 10.30 pm when the device exploded by remote.

Now a senior officer has been appointed to review security province-wide for PSNI staff both on and off duty following two bids by dissidents to kill police in less than 24 hours.

At first police believed the vehicle had come under attack from either a blast bomb or pipe bomb hurled by dissidents lurking in the dark shadows of the graveyard.

But in a statement today, the PSNI said: “The investigation into the bomb attack on a police Landrover on the Falls Road has revealed that the device was not thrown at the vehicle as was originally suspected but had been left in place at the City Cemetery and detonated by the use of a command wire.

“Four officers and several members of the public were caught up in the explosion.”

Four members of a Filipino family – one adult and three children – who were driving past the scene cheated injury in the attack but were left badly shocked by their ordeal.

Their car suffered extensive damage as it was laced with lethal shards of shrapnel from the bomb blast.

Crimes scene investigators spent yesterday combing the scene for the firing point in the graveyard.

She added: “It was also an attack on the community of West Belfast, and it is only through good fortune that no-one, either police or civilian was seriously injured or killed last night.

“As with all incidents a review of the police response will be carried out to ensure that we do everything possible to provide the highest quality response to the communities of North and West Belfast.”

As the officer travelled along the Suffolk Road on Friday morning a booby trap bomb attached to the underside of his car with magnets fell off.

It was later discovered by a passing police patrol lying in the road around 8.30 am.

Terry Spence, who represents rank and file cops, said the attacks were a “worrying development” but also “reckless and futile”.

“We have asked for a fundamental security review and we have been told by the PSNI that there will be a review right across the province but in particular in north and west Belfast,” said the Police Federation chairman.

“The officers were very fortunate to escape unhurt in what was a clear attempt to murder and maim.

“Those responsible have absolutely no regard or respect for life.

“It was a reckless, cowardly and futile action by individuals who have nothing to offer.

“These terrorists will not succeed in their goal,” he added.

Detectives have appealed for anyone who noticed any suspicious activity in the area of the City Cemetery in recent days to contact them at Woodbourne PSNI station on 0845 600 8000.