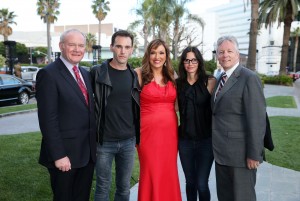 Speaking at the event the First Minister Peter Robinson said: “The Northern Ireland Executive has invested in our creative industries sector to ensure we have the people and the infrastructure to produce world class productions.

“Northern Ireland’s creative industries sector is continuing to grow at a remarkable pace creating employment opportunities for hundreds of people and generating millions of pounds in our local economy. The creative skills and experiences our young people gain through Cinemagic and working with industry experts leaves them well placed to follow their chosen career.

“Working in Belfast, Dublin, England, France, and the US Cinemagic is truly a global success. Cinemagic plays a vital role developing our young people by providing opportunities for both personal and professional development.

“I commend Cinemagic’s CEO Joan Burney Keatings and all the Cinemagic staff for their hard work which has resulted in young people from Northern Ireland having the opportunity to showcase their skills and talents.”

The 5th Cinemagic festival is a celebration of the magic of film and television to educate, motivate and inspire young people, aged 4 – 25, from all backgrounds through screenings, workshops, industry master classes and filmmaking projects.

The deputy First Minister Martin McGuinness said: “Large scale productions in the north of Ireland like HBO’s Game of Thrones and Hollywood films like Dracula confirm our global appeal as a filming location. 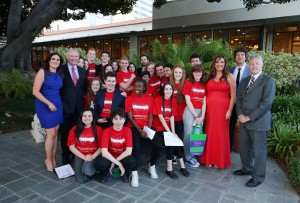 “I thank Cinemagic for their foresight and hard work which has resulted in over half a million children and young people having the opportunity to get involved, take on responsibility and build their confidence.”