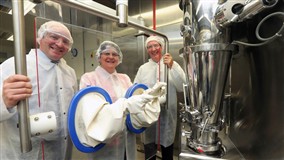 PHARMACEUTICAL company Almac has opened two new offices in Japan and Singapore to meet a growing demand for its services in Asia.

The Craigavon-based firm, which employs 3,300 staff, specialises in drug testing and development, and has managed thousands of clinical trials.

Chief executive Alan Armstrong has hailed the Far Eastern move as a “significant step forward for Almac in expanding our business in the Asia Pacific region”.

The pharmaceutical development boasts that 95 per cent of its business comes from customers outside the UK.

In a statement, Almac said that staff from the firm’s Craigavon facility will be based at the new Asian hubs “to apply insights gained from Almac’s experience managing more than 10,000 trials around the world”.

Mr Armstrong said: “With 15% of all clinical trials conducted in Asia, it’s imperative that we provide localised service and support to the sponsors of these trials.”

The firm has also announced that it will open a new secondary packaging facility in Singapore by the end of this year.

It also has US business premises in Pennsylvania, North Carolina and California.

The Almac Group was founded in 2002 by the prominent businessman by Sir Allen McClay who had previously found Galen in 1968. He four years ago aged 77.


One Response to NI DRUG TESTING FIRM IS TURNING JAPANESE