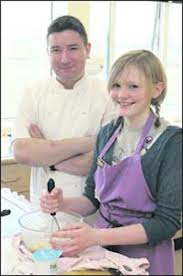 THE Great British Menu is coming back for a ninth series.

And there are plenty of new chef faces appearing in this series as well as plenty of veterans.

Speaking of which, veterans play a massive role in this year’s banquet, which mark the 70th anniversary of D-Day – a theme that judge Oliver Peyton says was a real privilege to be involved in.

The chefs representing Northern Ireland this year will be: Will Brown, The Old School House Inn; Raymond McArdle, Restaurant 23; and Chris McGowan, Corrigan’s Mayfair in London.

According to the BBC, they are among the 24 chefs competing this year are tasked with producing dishes that are “worthy of our war heroes”.

The dishes they produce “must evoke the wartime spirit of the generation which fought for our freedom as well as honour the bravery shown throughout the Second World War and, of course, taste delicious too!”

Once again Peyton will be joined on the judging panel by GBM stalwarts Prue Leith and Matthew Fort.

Great British Menu: The D-Day Banquet will run every weekday for nine weeks with the final ‘banquet’ programme to be broadcast on 6 June, the 70th anniversary of D-Day itself.