MAKE A GIANT OF YOURSELF 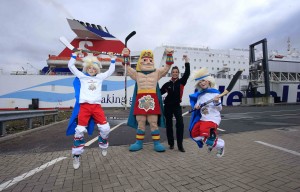 Little Finn McCool’s Michael (left) and Grace Hewitt from Belfast are all set for a giant night of fun at the Odyssey Arena on Friday, March 21.

Stena Line wants everyone, young and old, to come dressed as friendly giant, Finn McCool in order to win a family sailing to Liverpool or Scotland as Diane Poole OBE, Stena Line Head of PR & Communications for the Irish Sea explains.

“The Stena Line Belfast Giants have once again taken home the title and we couldn’t be prouder of them. So to celebrate we want to give a return sailing to the best dressed Finn McCool lookalike on the night of March, 21. The competition is open to everyone who attends the match dressed as the team mascot so have fun and be creative with your costume,” said Diane.

Diane continued: “As title sponsors of the Belfast Giants, we are delighted to see them win, and win big and we’d like to congratulate them on their performances throughout the season.”

Whether the whole family dresses up as Finn McCool as they descend on the Odyssey Arena or just your little giants, the Stena Line Belfast Giants want to see as many characters down at the match cheering on the team as they take on the Nottingham Panthers in the first leg of the Challenge Cup final.

Stena Line Belfast Giants, General Manager, Todd Kelman added, “This has been a really exciting season and we are delighted with what we have achieved so far. We’re delighted that Stena Line is giving this great prize to one lucky person so families, kids and big kids should join in the fun and get dressed up in their best Finn McCool costumes for the night.”