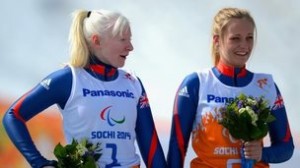 BANGOR’S Kelly Gallagher has on Britain’s first ever Winter Paralympic gold with victory in the visually impaired super-G in Sochi.

The 28-year-old and her guide, Charlotte Evans, were first on the Rosa Khutor course and clocked one minute 28.72 seconds.

“It was nerve-wracking but I’m delighted with the result,” Gallagher told BBC Sport.

“Normally when we compete, even in big events like World Championships, there is nobody interested in what we are doing but here there has been a lot of hype and pressure, as well as expectation, and maybe we let some of that in, so today we just decided to ski and see what happens,” added the 28-year-old visually impaired skier.

“I have to thank Charlotte for getting me to the line. We just threw ourselves at it. I prayed for the strength to ski and have fun.”

Gallagher, who has oculocutaneous albinism, a condition with affects the pigment in her hair, skin and eyes, started skiing for the first time when she was 17 on a trip to Andorra and began working with Evans, from Kent, in late 2010.

Since then, the pair have won silver and bronze medals in the 2011 and 2013 World Championships as well as World Cup honours.

Britain has had athletes competing in every Winter Paralympics since the first event in 1976 in Sweden and the three medals won so far surpasses the minimum target of two set by UK Sport ahead of the event.

Gallagher will be in action again in Tuesday’s super combined event. They will also compete in Friday’s slalom, along with Etherington and Powell.