RETURN OF THE DISSIDENT LETTER BOMBERS 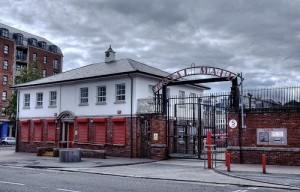 MEMBERS of the public have been warned to be vigilant after the discovery of a bomb in a postal sorting office.

Army Technical Officers were called to the office in Great James Street, Derry yesterday afternoon after staff became suspicious about a package,

The viable device was in a white A4 envelope with the address written in a grey stencil.

It was no coincidence that the package was found on the day that two Derry men were being sentenced in Belfast after pleading guilty to having a rifle linked to dissident republicans.

Mark Kerr, 26, of Carrabane Walk and Tony Taylor, 45, of Bishop street were each jailed for three years after they were caught in a covert police surveillance operation on the ground and in the air on Tuesday, August 2, 2011.

Police have warned the public to be vigilant and to contact the PSNI immediately if they notice anything suspicious.

Last month, a number of letter bombs were sent to British army recruiting offices in England.

Last October, a viable device was delivered by a Derry post man to the offices of the Public Prosecution Service on Limavady in the Waterside area of the city.

A device had earlier been sent to PSNI Chief Constable Matt Baggott.


One Response to RETURN OF THE DISSIDENT LETTER BOMBERS