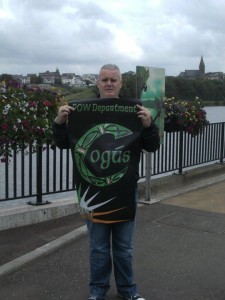 DETECTIVES are investigating a possible link between to prison destined letter bombs and the jailing of two republicans caught with a dissident rifle.

Two letter bombs were found at separate postal offices within the hours of Mark Kerr, 26, and former Provo bomber Tony Taylor being locked up after they were nabbed in a covert police surveillance operation three years.

Within hours of the pair being jailed for three years each, the devices were discovered at Royal Mail sorting offices – one in Lisburn, Co Antrim and the other at Great James Street in Derry.

The PSNI’s Terrorist Investigation Unit are now investigating a possible link to their jailing and the parcel bombs posted to the jail will be housed until they are released in August.

The packages were addressed to Maghaberry Prison which houses scores of dissident republicans sentenced and remand inmates.

The first was intercepted at Derry’s main sorting office in Great James Street on Thursday. The second was found at Linenhall Street, Lisburn.

Both were examined by Army Technical Officers who described them as viable devices.

They have been removed for further examination and the streets that were closed during the separate bomb alerts have all reopened.

The letter bomb found in Derry was in a white A4 envelope with an address in a grey stencil.

Police have warned the public to be vigilant and to contact them if they receive a similar package.

A Royal Mail spokesperson has said that the Derry attack has not affected postal delivery services in the city and it will be “business as usual” for customers on Friday.

In a joint statement, Peter Robinson and Martin McGuinness said the people who sent the packages have no respect for postal workers, the wider community or the future.

Justice Minister David Ford said the letter bomb at the Derry sorting office was an attempt to kill and he condemned those responsible.

“Yet again we have a cold-blooded attempt to cause death or serious injury,” he said.

“Those behind this device do not care who they hurt or injure and have nothing positive to offer.”

Secretary of State Theresa Villiers said: “Once again these individuals have demonstrated a completed disregard for our postal workers and the local community.”

A number of letter bombs were sent to Army recruiting offices in England last month.

Four devices were also intercepted across Northern Ireland in October.

Two were addressed to police officers, one to Secretary of State Theresa Villiers and the fourth to the offices of the Public Prosecution Service in Derry.