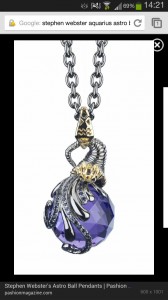 The piece of jewellery stolen from house in east Belfast

DETECTIVES are investigating a burglary at a house in the My Lady’s Road, East Belfast.

At approximately 12.20 pm on Tuesday 4 March it was reported to Police that a house in the area had been entered by an unknown male.

The male, who pretended to be a workman left the property after being spoken to by the occupants daughter.

After he had left the property it was discovered that a sum of cash, cameras and a number of items of jewellery and a silver boys bicycle were missing.

He is described as being approximately 12 to 14 years old, approximately 4’ 10 “ tall, short spiky blonde hair, stocky build. He was wearing a grey cotton tracksuit bottoms and grey top.

Police would appeal to anyone who may have witnessed the incident, saw anyone acting suspiciously or a male in the area on a silver bicycle or who has any information to contact them at Musgrave Police Station on 0845 600 8000.