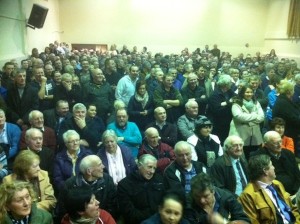 A border community is fighting back against crime-gangs with an astonishing 300 people signing up to become the eyes and ears for law and order.

Concerned residents living in the Manorcunningham, St Johnston, Raphoe, Carrigans, Convoy and surrounding areas along the Derry/Tyrone-Donegal border came together to launch a fight-back against burglars in recent weeks.

The move followed nightly raids on the homes of pensioners.

It is believed a number of the raids were carried by gangs based in Derry.

A meeting called last month was attended by more than 1,500 people looking at ways of beating the crime gangs terrorising pensioners.

Businessman Tony Morning, who initially called the meeting to combat the crime-gangs, said the community had pulled together and shown great local spirit.

“I never thought there would be this level of community co-operation. It has been fantastic,” he said.

“We had 300 people here signing up to take part in and run the Text Alert system. We will have people in every town land and it is spreading to other parts of the county.

“We had more than 1,500 people at our first meeting. That’s 3,000 eyes on the look-out for people acting suspiciously.

“People are being much more vigilant now and ensuring that these elderly people can rest safer in their beds at night,” he said.

At present the group are continuing to sign people up for the text alert scheme and continuing to fit and install alarms and sensor lights for elderly people at cost price thanks to help from local security companies.

Local people are also checking on elderly neighbours at all hours to reassure them of their support.


One Response to TERRORISED RESIDENTS VOLUNTEER TO TAKE ON CRIME GANGS