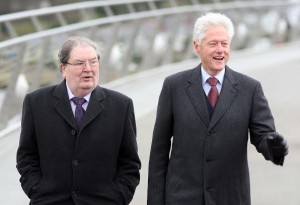 “FINISH THE JOB” – that was the message delivered by former US President Bill Clinton during his visit to Derry today.

Speaking to a crowd of several thousand in Guildhall Square, Mr Clinton recognised the contribution former SDLP and Nobel Laureate John Hume made to the peace process.

President Clinton said the issues around flags and parades could be resolved and lasting peace needed to be achieved for the younger generation.

He added: “You have have to be free, these children have to have a future. It is not for me to say what the details should be.

“You have inspired the world. You have to finish this. On this cold and windy day, I am doing my best to resist doing what people my age intend to do, which is to reminisce – enough of that, live in the future, think of tomorrow.

“What kills people is not adversity. What kills people’s spirit is believing every tomorrow is just going to be like yesterday – and as long as people have something to look forward to when they get up in the morning, they can overcome adversity – they can deal with any setbacks – that is what I want from you.”

Referring to the number of young people in the crowd, President Clinton said it was owed to them to “finish the job.”

He added: “There are people who have been shut off from the world for decades who are desperately looking for a way to make a new world – they are looking at you. 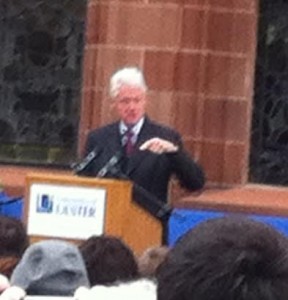 “This economy is coming back we need to get this show on the road. So, I implore you for the sake of the young people and for all those who done so much for so long, like John, finish the job.”

He concluded: “I thank you for what you have done. My heart is with you always and you have given me one more day in Derry I will never forget.”

At one stage President Clinton’s speech was interrupted by a single heckler who shouted “What about Iraq?”

Earlier, he helped launch Peacemaking In The Twenty-First Century, a new book on peacemaking, on behalf of the University of Ulster.

The book features a series of Tip O’Neill lectures, one delivered by President Clinton, at the unversity’s Magee campus in Derry.

On his arrival in Derry, President Clinton was accompanied by John Hume and his wife, Pat, for his first walk on the city’s Peace Bridge which he described as “beautiful.”


One Response to CLINTON: FINISH THE JOB ON PEACE PROCESS