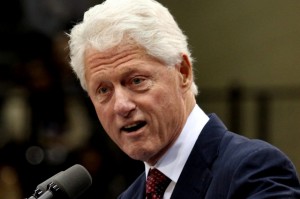 FORMER US President Bill Clinton is back in Northern Ireland today.

President Clinton is to give a public address from the Guildhall Square in Derry in which he will pay tribute to Nobel Peace Laureate and former SDLP leader John Hume for his efforts to the peace process.

There will also be performances during the event from Derry’s own Phil Coulter and the University of Ulster choir.

During his visit, President Clinton will help launch “Peacemaking In The Twenty-First Century,” a new book celebrating the Tip O’Neill series of peace lectures given at the University’s Magee campus.

John Hume held the Tip O’Neill Chair in Peace Studies at the University of Ulster from 2002 to 2009.

Encouraging the Derry public to along to the Guildhall Square to welcome President Bill Clinton back to the city, Mayor Cllr Martin Reilly said his return was a “huge accolade” for the city and a great opportunity for the public to share in “this city celebration.”

The Mayor advised those intending going along to get to Guildhall Square early and to be mindful that it was an outdoor event with no cover.

Some minor traffic disruption and delays can be expected.