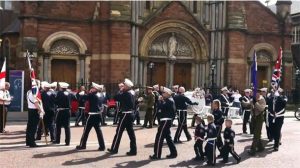 SEVENTEEN members of a loyalist flute band were today cleared of defying a ban on marching past St Patrick’s Catholic Church in Belfast’s Donegall Street.

However, today a  judge dismissed the case against all of the defendants, who included three youths, because it could not be proved they knew about the determination.

The Parades Commission had a march along a forbidden section of the route during a Royal Black Institution parade.

In July 2012, the Shankill Road-based Young Conway Volunteers had been filmed walking in circles outside the church on Donegall Street.

The band denied claims that it was playing the sectarian Famine Song during the Twelfth of July demonstration.

Following that controversial incident the Parades Commission ruled that it should not pass St Patrick’s on the ‘Black Saturday’ event.

Belfast Magistrates’ Court was shown footage of the band then marching on the prohibited part of the route.

Solicitors for the defendants argued that the band members had been unaware of the prohibition and should have been told by the Parades Commission or the RBP directly.

The court didn’t accept prosecution assertions that the bandsmen knew of the ban because signs had been erected and nationalists had staged a counter protest.

The district judge said the crown had not proved its cases and “dismissed” the charges against all defendants.