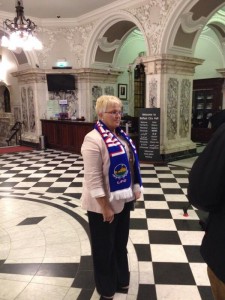 A FRESH row is brewing inside Belfast City Hall between the DUP and Sinn Fein.

First, the council was engulfed in a bitter row over a vote to only fly the Union flag over City Hall on only designated says.

Now, there has been more uproar tonight in the council chamber when DUP councillor Ruth Patterson wore a Linfield FC football scarf to the meeting.

The party said it was in support of a motion congratulating David Jeffrey who is stepping down as Linfield boss at the end of this season.

Sinn Fein leader Jim ‘Flash’ McVeigh asked if it was not against workplace rules for the scarf to be worn at a council meeting.