Sean Hackett (19) is on trial for the murder of his father Aloysius Hackett who was found dead with gunshot wounds in the yard of the family home at Aghindarragh Road in Augher, Co Tyrone, shortly before midnight on January 4, 2013.

Dungannon Crown Court heard that the teenager, a rising star in Tyrone GAA football, admits the killing but denies the murder of his 60-year-old father.

The defendant also denies two further counts of having a firearm, namely a .22 Czechoslovakian-made hunting rifle and ammunition between November 1, 2012 and Decembern 25, 2012, and also between December 31, 2012 and January 5, 2013.

Opening the case for the crown, prosecuting counsel Ciaran Murphy QC told the jury: “There is no dispute between the parties in relation to the facts that Sean Hackett shot his father in the head on January 4, 2013 with a rifle which he obtained from his friend Ronan Mulrine.

“There was no other person involved in these alleged offences. The defendant accepts that he intended to kill his father.

“We say that Mr Sean Hackett murdered his father Aloysius Hackett. It is the most serious crime in the criminal calendar.

“He used a .22 calibre rifle to kill his father and did so, we say, deliberately, and did so after having obtained the rifle, clearly planned to use it.”

Mr Murphy told trial judge Mr Justice Stephens that Sean Hackett borrowed the rifle on two occasions and on the second occasion “we say he murdered his father” with the same gun.

The jury heard that Ronan Mulrine had previously been charged with possessing the rifle and ammunition in suspicious circumstances but pleaded guilty to providing the weapon.

“He had no knowledge of what Sean Hackett’s intentions were,” said crown counsel.

The jury of six men and six women heard that police received a report from ambulance control around 11.50 pm on January 4, 2103.

PSNI officers went to the scene at Aghindarragh Road where they found the body of Aloysius Hackett at the back of the house, lying on his back with a bunch of keys to his Citroen Xsara car in his right hand, the court was told.

Mr Murphy QC said that a silver Peugeot 307 car, which Sean Hackett had borrowed that night, was parked in the driveway of a neighbour’s house.

He said that Sean Hackett had reported the death to his neighbours Cathal and Marie McKenna who appeared to them to be “shocked” when he arrived at their home.

The court was told that the couple drove to the Hackett home nearby and found the body of Aloysius Hackett.

Police later searched the Peugeot car and found the .22 rifle under a mat in the boot.

When first spoken to by police, Mr Murphy said Sean Hackett told officers that “something was wrong at the house” and told them there may have been a burglary.

The court heard officers who attended the scene found blood splatterings on the rear step of the Hackett home and also noted blood on the knees of Sean Hackett’s tracksuit trousers.

Mr Justice Stephen was told that a detective inspector arrived at the scene at 2.55 am on January 5, 2013 and was told that Sean Hackett wanted to speak to him.

“He was cautioned and made no reply but in respect of what happened, he replied: ‘I shot him”’. 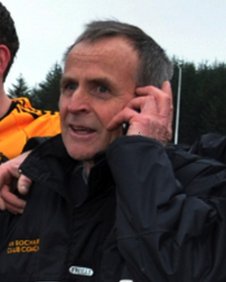 Sean Hackett was taken away for interview but made no reply to questions for almost two days he was in police custody.

However, the court heard that he had made a prepared statement for detectives. It said: “I was involved in an incident with reference to the death of my daddy whom I love very much.

“I have been suffering from depression and was seeking medical attention at the time. That’s all I have to say at this time.”

The court heard that on January 8, 2013, Sean Hackett was formally charged with the murder of his father.

He said that Mr Hackett had been shot twice to the head but the court was told that in the opinion of Mr Bentley, the second bullet had caused the fatality as if had lodged between the brain and the skull.

The jury heard that a forensic examination of the scene recovered a third spent round was which was found lodged in the doorframe of the back door of the Hackett home.

Two other spent .22 shell casings were found in the clothing of Sean Hackett following his arrest for the murder, the court heard.

He added that the pair went to the Mulrine home and Sean Hackett removed the .22 rifle from a locked gun cabinet along with a quantity of ammunition.

The prosecution lawyer said the rifle could operate in two ways: by inserting a magazine into gun or by using it in a bolt action fashion, loading a round at a time into the gun or two at a time.

“The death of Mr Aloysius Hackett was as a result of being shot to the head. All the fatal wounds were inflicted by Sean Hackett loading and reloading the .22 rifle in order to shoot dead his father.

“This was a crime, we say, was planned, that he obtained the weapon and clearly knew how to use it accurately.

“He did what he did and then was able to load and reload that weapon despite the horror of what he must have seen before him once the first shot had been inflicted.

“Despite all of the horrors of doing what he did to his own flesh and blood, his own father, Sean Hackett, we say, is guilty of the murder of Aloysius Hackett,” added Mr Murphy QC.