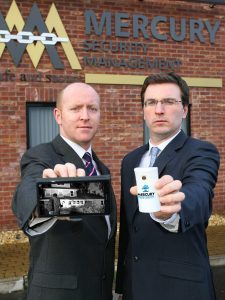 A LOCAL security firm has developed what it believes to be a potential solution to the serious problem of domestic burglary in Northern Ireland.

A PSNI report last year revealed that in the financial year 2012/13, there were a staggering 5,945 reported incidents of domestic burglary in Northern Ireland.

That’s the equivalent of a whopping 16.3 incidents per day or one incident every 88 minutes.

In recent months, Northern Ireland has witnessed extreme examples of ‘hostage burglary’ and ‘tiger kidnapping’ in which residents have been held captive in their own homes while criminals stole from their houses or places of work.

Earlier this month, a family were held hostage in their West Belfast home in a ‘tiger kidnapping’ incident which began when a caller, posing as a postman, produced a gun and demanded money which was eventually stolen from a family member’s workplace.

This followed an incident in late January which saw a man and a woman hospitalised after being tied up while their home in Banbridge was burgled by five masked men, one of whom had a gun.

To combat this worrying problem, Northern Ireland’s biggest independent security company Mercury Security Management Ltd has been working on a solution to protect people feeling vulnerable in their own homes to attack and burglary from organised crime gangs.

The Mercury Home Watch system is an adaptation of the company’s very popular Mercury Eye solution for businesses and utilises a wireless security camera in the home which detects intruders, triggers an alarm and instantly transmits a live visual feed to the resident’s smart phone or to Mercury’s monitoring centre.

Once alerted to the danger, the recipient can in turn immediately inform the police of any intrusions, enabling them to send a patrol out quickly to the property and make arrests if the intruders have not been scared off already.

Residents can also engage the criminals verbally through a speaker system to warn them that the police are on their way.

The system does not require electricity or broadband and as such is protected against power cuts or damage to your phone line.

Mercury Security director Liam Cullen claims that the Mercury Home Watch is the most effective deterrent to date in the battle against domestic burglary.

“The experience of being burgled can be a very traumatic one for victims who may be left feeling angry, violated and unsafe in their own home,” said Mr Cullen.

“Most burglaries occur during daylight hours, when homes are often vacant, but unfortunately there is also a significant number that take place when the house is occupied when protection for your family becomes the over-riding priority and concern.

“Mercury Home Watch cameras will detect intruders, visually record them and transmit live moving images in real time to either the resident’s mobile phone or to our monitoring station to alert them of the danger and the reality of the intrusion.

“Having received visual verification, the recipient(s) can then alert the police immediately, without worrying about potential false alarms, and speak live to the intruders to inform them that the police are on their way, which in itself will act as a very effective deterrent for criminals who don’t want to run any risk of being caught in the act,” he added.

“One of the great benefits of Mercury Home Watch is the fact that you can protect your ground floor while you sleep. And for added protection, if you fail to answer your smart phone when a live intrusion occurs, we take control of it at the Mercury 24/7 monitoring centre and call police and key-holders. Also, if requested, customers can call on the services of a Mercury Mobile security team who can make their way to the premises to handle the situation.

“There has never been a more effective deterrent to prevent domestic burglary, property theft or vandalism in Northern Ireland, and the good news is that the Mercury Home Watch system costs less than most standard audio burglar alarm systems currently on the market, making it affordable for pensioners and people on limited budgets,” concluded Mr Cullen.

The Mercury Home Watch system is equally effective for houses that are under construction or refurbishment which are neither occupied nor easily watched. Once the house is fully built and the keys handed over, then the system can continue to protect home owners, their families and their property. In addition, the system can be adapted to include the Mercury Home Watch fire detection service that will alert home-owners and the Mercury monitoring centre of a fire at the premises.

For more information on Mercury Home Watch, including a free survey, home dwellers should call Mercury Security Management on 028 9262 0510 or email [email protected]