ENJOY A GIGGLE AT THE GLASGOW INTERNATIONAL COMEDY FESTIVAL 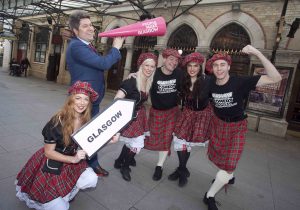 A GIGGLE IN GLASGOW: Bruce Devlin, well known Scottish comedian is pictured with his troupe of dancers who are promoting the Glasgow International Comedy Festival

COMEDY fans were in for a treat as well known Scottish comedian Bruce Devlin popped up around Dublin to encourage NI comedy lovers to attend the Glasgow International Comedy Festival which returns to Glasgow this year from March 14 – April 5.

As it celebrates its twelfth year, the bumper line-up of popular comics is guaranteed to bring the house down with non-stop laughter and hilarity.

With 416 shows across 46 venues, the programme is packed with stand-up, film, kid’s shows and workshops.

Along with Glasgow’s acclaimed arts and cultural attractions, world class shopping and vibrant nightlife, it is the perfect reason for NI holidaymakers to treat themselves to a weekend break away in Glasgow this March.

The 2014 festival boasts a huge variety of well known acts and upcoming talent. The SSE Hydro, Glasgow’s newest entertainment venue, will host an unprecedented two nights of entertainment from comedy’s biggest name of the moment Miranda Hart, while Sarah Millican will play the Clyde Auditorium.

Other big names at the festival include Omid Djalili, Russell Kane, Rich Hall and Rory Bremner as well as home grown Scottish talent such as Fred MacAulay, Dorothy Paul and Jerry Sadowitz.

The varied programme has a genre to suit every taste and budget and will hit on some of the most topical subjects in Scotland this year; including the 2014 Commonwealth Games, which will see visitors from across 71 nations touch down in the city this July for one of the greatest sports shows on earth.

“We are delighted to be celebrating our twelfth anniversary and this year the Glasgow International Comedy Festival hosts an even bigger and better line up of world class comedians and from old favourites to new, up and coming talent, there really is something for everyone. The Festival programme is diverse, bold and packed with talent from around the world, reinforcing why Glasgow is a city of choice for the top acts on the international comedy circuit.”

“Glasgow is Scotland’s cultural capital and the Glasgow International Comedy Festival is at the heart of our fantastic, year-round events programme. The calibre of this year’s Festival is nothing short of world-class; showcasing an eclectic line-up of the very best comedians from home and abroad.

“As one of Europe’s most vibrant, dynamic and stylish cities, there’s never been a better time to visit Glasgow. In addition to hosting the Commonwealth Games and MTV European Music Awards in 2014, Glasgow is home to the best shopping experience in the UK outside of London, outstanding architecture, the largest civic arts collection in Europe, cutting-edge literary and music scenes, and a dining experience described as the best in Europe by travel bible Lonely Planet – all of which is wrapped in the famously warm and witty Glaswegian personality.”