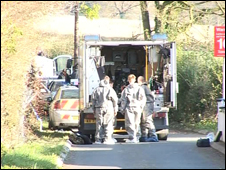 A MASSIVE security operation has uncovered three pipe bombs and ammunition hours after an attack on a home.

The follow up searches were carried out after a pipe bomb exploded outside a house in Patrician Park, off the Dublin Road.

A family of five escaped injury in that attack around 9.20 pm on Wednesday.

The family members, including a couple and their three grown-up children, were at home at the time but were not hurt.

The PSNI said the Parkhead search was being conducted as part of an investigation into serious crime.

Local police boss Chief Inspector Davy Beck said: “I am happy that these potential pipe bomb type devices and ammunition have been taken off the streets of Northern Ireland.

“The public can rest assured that we will continue to serve the community of Newry.”

The attack in Patrician Park caused damage to the family-of-five’s house and a car parked outside the property.

ATO personnel and Ardmore police were called to the estate and they cordoned off Patrician Park for about three hours while the scene was examined.

No motive for the pipe bomb attack has been been established and detectives have appealed for anyone with information to contact them on 0845 600 8000.

Local SDLP MLA Dominic Bradley said two pipe bombs were thrown at the property and he described it as a “senseless” attack.

“This house is in a quiet residential area and this was a senseless attack for which there is absolutely no justification.

“Those behind this attack are enemies of our community and anyone with any information should contact the police immediately,” he added.


One Response to PSNI: THREE PIPE BOMBS FOUND AFTER DEVICES THROWN AT HOUSE