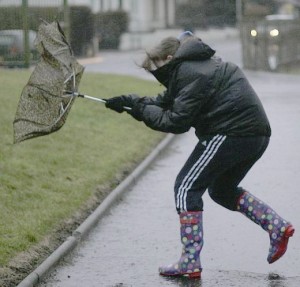 THE Met Office has issued an amber weather warning for Northern Ireland.

Forecasters fear gusting winds sweeping in from the Atlantic will top speeds of 80 mph.

On Wednesday evening, Orlock Bay in Co Down reported the highest wind speed of 78 mph

NIE has warned of possible damage to the electricity network.

And the PSNI has warned drivers to exercise extreme caution when out on the roads because of the high winds.

Police say the A1 Northbound between Banbridge and Dromore closed at junction with Skeltons Road and Drumneath Road due to a fallen tree. Diversions are in place.

In England, police have reported that a man in his 70s has died in Wiltshire after he was electrocuted on Wednesday evening.

An amber warning is the second highest of the severe weather alerts, and means to be prepred for disruption.

Belfast International Airport is receiving flights that have been diverted from Dublin airport due to the storms.

Meanwhile, part of the road between Warrenpoint and Rostrevor in County Down collapsed, according to Translink.

The public transport company said the collapse had affected its Ulsterbus Service 39 between Newry and Kilkeel, which has been diverted through Mayobridge and Hilltown.

Police asked drivers intending to use the Rostrevor Road to take an alternative route.

A number of sailings between Dublin and Liverpool have also been cancelled.

The latest winds come after reports of heavy snow in parts of Co Derry in the morning, including areas of Tobermore, Draperstown and Maghera.

The Roads Service said it used snow ploughs to keep some routes clear and has gritted the main roads, but some minor roads were extremely icy.

Passengers have been urged to check Translink’s Ulsterbus website for the latest travel updates,


One Response to WEATHER WARNING ISSUED ACROSS NORTHERN IRELAND