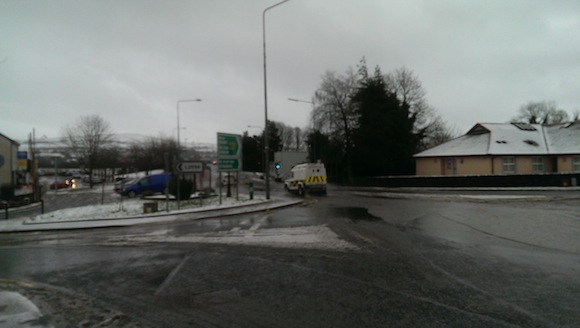 PSNI landrover crossing back into Strabane after driving into Lifford, Co Donegal

THIS is the amazing picture which shows the PSNI crossing the border into Lifford this morning.

Tonight, the PSNI issued a statement apologising for the driver’s “error”.

“A police patrol inadvertently crossed the border into Lifford today for a short time.

“On realising his error the driver turned at the next available roundabout.

“Police have made An Garda Siochana aware of the incident.”

Donegal’s Chief Superintendent Terry McGinn has been made aware of the incident and has received a copy of the picture.

Local Independent county councillor Frank McBrearty has called for a full investigation into the matter.

“This is an international incident and it has to be fully investigated.

“Innocent people could have been hurt if dissident republicans had got word of this incident and opened fire on this landrover.

“A full investigation must be carried out into what has happened here. This is a serious breach of the protocols which exist between our two police forces,” he said.


2 Responses to REVEALED: THE MOMENT PSNI PATROL CROSSED INTO DONEGAL