TAKE ME OUT! HAS NI’S GEMMA ELLIOTT GOT HER MR RIGHT? 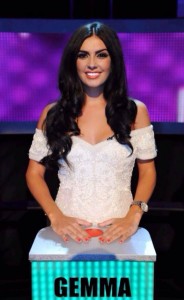 Take Me Out contestant Gemma Elliott was picked by Arry

NORTHERN Ireland girl Gemma Elliott cashed in on a “cheeky chappy” in last night’s episode of the TV dating show “Take Me Out!”

Despite declaring he was a “sucker for blondes,” London stockbroker Arry – with the help of his nan – chose the dark-haired 22-year-old from Derry’s Bishop Street area for a dream date on the island of Fernandos.

He said: “She got her legs out in round two and they were a cracking pair of legs and I wouldn’t mind seeing them on Fernandos beach.”

Gemma had a word of warning for her date: “I think on our date in Fernandos, Arry will be a bit of a cheeky chap but if he gets too cheeky I will not be too long putting him line.”

However, she was not in tune with his trombone-playing Indiana Jones impression after making it into the final four girls.

Richard from West Yorkshire, dressed in white suit, red shirt and tie got past the first round but Gemma slammed the brakes on any possible relationship when he revealed he “got his kicks” from his “pride and joy” – a TVR sports car.

Tune in next week to find out if Gemma, an economics and finance student at Leeds University, has got her numbers right or has she been short changed.


3 Responses to TAKE ME OUT! HAS NI’S GEMMA ELLIOTT GOT HER MR RIGHT?