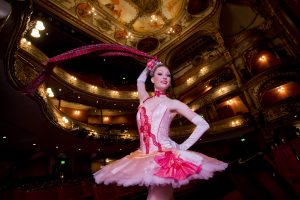 Leading Scottish Ballet Dancer, Quenby Hersh, celebrated Homecoming Scotland 2014 in Belfast today, as she performs in Hansel and Gretel at the Grand Opera House from 5th to 8th February.

The leading ballerina believes, with Scotland’s rich creative landscape is firmly in the frame this year, there has never been a better time for Northern Ireland visitors to visit Scotland and soak up the thriving cultural scene.

Glasgow Film Festival (20 February to 2 March) A packed programme of activity including pop-up cinema and special events in unique Glasgow venues ensuring that the Festival presence is felt in every corner of the city. Highlights include the UK premiere of Wes Anderson’s new film The Grand Budapest Hotel; along with a screening of John Carpenter’s seashore horror The Fog on board a ship moored in the Clyde; not to mention a transformation of Kelvingrove into a 300-capacity “Monster Mash” event for a screening of the comedy Young Frankenstein, complete with live organ recitals on the night.

Glasgow International Comedy Festival (14 March – 5 April) The largest event of its kind in Europe, the festival has become a renowned annual event in Glasgow’s cultural calendar. The 2014 festival will once again boast an incredible line up of talent from around the globe. With 416 shows, in 46 venues across the city. The line-up of comic talent includes Sarah Millican, Miranda Hart and Ruby Wax.

Celtic Hebridean Festival in Stornoway (16-19 July 2014) A Festival of traditional and contemporary music on the Isle of Lewis in July.

Wickerman Festival (Friday 25 & Saturday 26 July 2014) A music festival in Dumfries & Galloway, notable in that it culminates in thousands of spectators flocking to watch a towering 40ft Wickerman be set alight.


One Response to LEADING BALLERINA ‘POINTES’ THE WAY TO HOMECOMING SCOTLAND