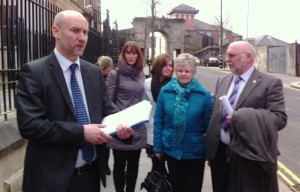 DCI Mark McClarence with the family of Phillipa Reynolds outside court

THE family of Phillipa Reynolds, the young PSNI officer killed by a drunk and drugged up Shane Frane in a horrific car crash, have thanked the public for the support they have received following the death of their daughter just under a year ago.

Speaking on behalf of the family after Frane was told he could spend the rest of his life in prison, Detective Chief Inspector Mark McClarence thanked everyone for the support they had received.

And he went on to pay tribute to the young PSNI officer. a former school teacher who left the profession to join the police because of her love to helping others.

“She was a bubbly, vivacious young lady, who was very good at her job. She is sorely missed on a daily basis by all those people in her response section and the wider police community as well.”

DCI McClarence added: “In my time in the police I have rarely heard so many positive comments about an individual from the community, from the police and from everyone who has had contact with her.”

Earlier, Constable Reynolds parents, Mervyn, a former RUC officer, and Dorothy, along with her sisters, Debra and Nicola, were in the public gallery of Derry Crown Court to hear Judge Phillip Babington describe Frane as a “dangerous offender” as he was given an indeterminate prison sentence and told he would not be entitled to parole for six years.

Frane (26) was the driver of a stolen Toyota Landcruiser which ploughed into an unmarked armoured Vauxhall Vectra police car – in which Constable Reynolds was a back seat passenger – at Dale’s Corner in the Waterside area of Derry in the early hours of 9 February last year. Two other officers were injured.

Shane Frane arrives at Derry Crown Court to be sentenced for the manslaughter of Const Phillipa Reynolds.

Shane Frane arrives at Derry Crown Court to be sentenced for the manslaughter of Const Phillipa Reynolds.

Frane and Conor Clarence (24) – who was passenger in the stolen vehicle – fled the scene and after changing their clothes to disguise themselves, returned to walk past the scene of the fatal collision.

They were arrested later than morning at a nearby Simon Community hostel for the homeless.

The court heard the pair had been on a day-long drug and alcohol binge, and Frane was caught on CCTV driving at speeds up to 80mph in a 30mph zone before the collision.

Frane admitted the manslaughter of Constable Reynolds plus a number of other offences.

Clarence was jailed for three and a half years for allowing himself to be carried in the stolen Landcruiser and offences linked to its theft.

He will serve half of the sentence in jail and half on licence.