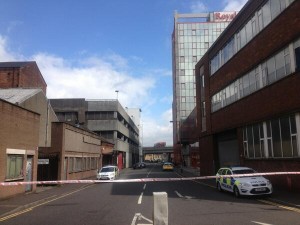 The scene of the security alert in Tomb Street, Belfast on Tuesday morning

THE PSNI say the security alert n Belfast has ended.

Police say nothing untoward had been found at the sorting office in Tomb Street in the city centre.

The alert was sparked when a suspicious package was found shortly before lunch-time on Tuesday.

The police were concerned as they believed it contained “an unknown substance”.