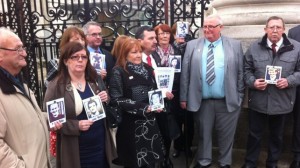 TAOISEACH Enda Kenny has agreed to support a call from relatives of the victims of the Ballymurphy Massacre for an independent inquiry into the events that left 11 people dead in August 1971.

The relatives emerged cheering from Government Buildings this evening, delighted after a 90-minute meeting with Mr Kenny.

The families want an independent panel inquiry, similar to the one used to investigate the Hillsborough soccer disaster in Sheffield.

Padraig O’ Muirigh, solicitor for the relatives, said it was a great step forward for their campaign and he thanked Mr Kenny for his support.

He also said, however, that there is still a lot of work to be done to persuade the British authorities to set up the inquiry.

The Taoiseach has also agreed to put the group’s case to the British government.

Earlier this week, the families took their campaign for an independent investigation into the killings to Europe.

A priest and a mother-of-eight were among those shot dead by members of the Parachute Regiment in west Belfast.

In a statement, the Irish Government said: “The Taoiseach told the families that the Government supports them, and is fully committed to assisting them in their search for justice, finding out the truth and vindicating the good name and reputation of their loved ones.

“He said that the Irish Government supports the call for the appointment of an Independent Panel to examine all documents relating to the context, circumstances and aftermath of the deaths.

“He also undertook to raise the matter directly with Prime Minister Cameron at their forthcoming meeting.”

Today’s meeting followed the families’ proposal to both the Irish and British governments that an independent panel be set up to investigate the killings.

The families have already approached a number of individuals who they believe should sit on the independent panel.

Those individuals include former Northern Ireland police ombudsman Nuala O’Loan, and Phil Scraton, who sat on the independent panel that investigated the Hillsborough stadium disaster in England.

Mr Ó Muirigh said they had deliberately approached people who they felt would be clearly seen as independent.

He said the people they had approached did not represent the families in any ongoing legal proceedings.

Mr Ó Muirigh also said the families were looking at a model for the investigation similar to that of the Hillsborough Independent Panel and one of the key issues in going for this model was how cost-effective it was.