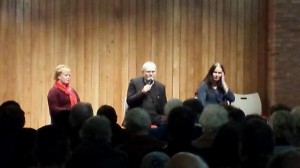 THERE have been rowdy scenes on Thursday night in east Belfast.

It follows the arrival of IRA Brighton bomber Patrick Magee arrived at the Skainos Centre on the Newtownards Road.

According to eye witnesses, protestors started to push and surge towards the door of the church-built building.

“It was getting very heated. A few missiles were thrown,” said one person.

“A protest had been organised online and people were urged to come and show their opposition to and IRA bomber speaking in east Belfast.”

The centre has also been attacked online for running Irish language classes.