AFTER over three years of denying the charges, a gas fitter dramatically pleaded guilty today to the manslaughter of two high school teenagers by carbon monoxide poisoning.

Neil McFerran and Aaron Davidson were overcome by the gas at a holiday apartment in Castlerock,  in 2010.

George Brown, from Ballygawley Road, Aghadowey, had consistently pleaded not guilty to the charge of manslaughter.

He had also previously denied a further 19 charges involving failures in health and safety legislation.

The charges related not just to the holiday home in Castlerock where Neil and Aaron perished, but also other private properties as well as a restaurant and caravan park in Coleraine.

* failure to protect non-employees, such as the two former prefects from Glengormley High School:

* failing to ensure those fitting gas appliances were qualified:

* and incorrectly fitting and failing to test that appliances were correctly connected.

The popular teenagers had been on a break in the seaside town before getting their exam results.

They were found by their parents, who went to Castlerock when they were unable to contact the young men. 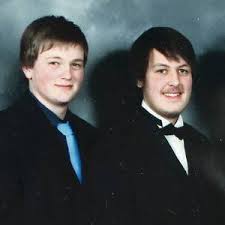 Both had been poisoned by carbon monoxide from a badly installed fire.

After Brown’s dramatic guilty pleas, the PSNI welcomed his decision.

Detective Chief Insp Rachel Shields said it was the first conviction of its kind in Northern Ireland.

“Aaron and Neil’s deaths were tragic.

“They prompted a wide-scale rigorous investigation on 3 August 2010.

“This involved members of the Health and Safety Executive NI’s gas safety inspection team, its major investigations team, its scientific services unit and officers from the PSNI’s criminal investigation department. This investigation culminated in today’s guilty plea,” she said.

“Over the course of the last three years, the families of Aaron and Neil have sought to highlight the issue of carbon monoxide poisoning.

“It is an issue that all households should be aware of.

After Brown pleaded guilty to all 21 charges, a prosecuting lawyer said: “This is a case where victim impact reports will be obtained in respect of the families of the two deceased, and of a third young man who was seriously injured in this tragic incident.”

Brown’s defence barrister confirmed pre-sentence reports would also be sought on behalf of his client.

Brown will be sentenced for the offences in March.