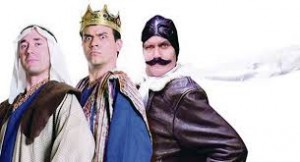 The spoof Bible play will now go ahead at Mossley Mill

NEWTOWNABBEY Borough Council has tonight voted to end a ban on a play unionist councillors and clergymen branded as blasphemous.

The Artistic Board reversed its decision of last week the support the DUP, including one of its councillors had broken ranks earlier to condemn the banning of the play at Mossley Mill.

Alderman Dineen Walker, deputy mayor of Newtownabbey, voted to overturn a decision on the Reduced Shakespeare Company play her party colleagues branded as blasphemous and an attack on Christianity.

Ms Walker said it was not the job of councillors to censor art.

While she has no interest in seeing The Bible: The Complete Word Of God (Abridged) production which was to play two nights at the Theatre At The Mill this week, she does not think it is appropriate to restrict others from doing so.

Anger has been growing since it was revealed the council’s artistic board – made up of councillors and independent members – had pulled the plug on the irreverent comedy under pressure from the DUP. The decision caused outrage and made international headlines.

The decision to ban the play, which has been performed across the globe over the last 20 years without ever being cancelled, was then taken last Wednesday at an away day meeting of the council’s artistic board, with no DUP members present.

The cancellation of the internationally acclaimed comedy show – which was due to run at Theatre At The Mill this Wednesday and Thursday – has enraged large numbers of people online and a number of prominent figures, including Australian comedian Tim Minchin and English scientist Richard Dawkins.

Patrick Corrigan from human rights organisation Amnesty International described the ban in Newtownabbey as interference with freedom of speech and artistic expression that “should be of concern to freedom lovers everywhere”.

And the Stormont Culture Minister Caral Ni Chuilin echoed sentiments from the Arts Council of Northern Ireland regarding its disappointment that the show has been cancelled.

UUP leader Mike Nesbitt has insisted one of his councillors and Newtownabbey Mayor Fraser Agnew, was not speaking on behalf of the party when he defended Newtownabbey Council’s decision to ban a play about the Bible.

The Strangford MLA said he would go and see the Reduced Shakespeare Company’s controversial production of The Bible: The Complete Word Of God (Abridged), unlike his party colleague Fraser Agnew.

Mr Agnew was among those who defended the council’s decision to ban the play because of accusations it was blasphemous and offensive to Christians, saying there was a “need to defend Christian values”.

But his party leader said it is the role of the arts to challenge people and he is not a fan of censorship.

“I would describe myself as a struggling Christian,” he said. “I understand people have passionate views which often reflect in objections to plays like this.

“The best thing to do is simply not to go. I am not in favour of censorship. Art is to instruct and entertain and that often involves a huge challenge.

“Fraser was not speaking on behalf of the Ulster Unionist Party. He was reflecting the views, as mayor, of constituents and ratepayers.”