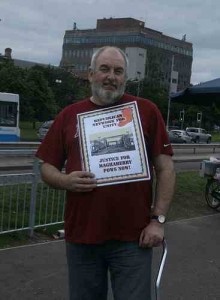 EXCLUSIVE: TWO dissidents terrorists caught by MI5 transporting a pipe bomb are at war behind bars over their jail sentences.

Former Ulsterbus driver Eugene McLoone(56) is said to be “furious’’ that he got a seven year determinate sentence last November after he was caught in Derry.

Now he has launched the first round of an appeal against his sentence at the Court of Appeal arguing there was “not enough disparity’’ between what he received and those handed down to his two co-accused.

Daniel Doyle (48) was jailed for seven-and-a-half-years and Eamonn Cassidy (51) received eight years sentence when they were sentenced last November.

Lawyers for the Director of Public Prosecution Service agree with McLoone.

As McLoone was launching his appeal papers, PPS lawyers were in the same court to appeal against Cassidy’s eight sentence on the grounds it was “unduly lenient’’.

A legal source told Belfast Daily: “Cassidy should have received a lot more than an eight year sentence given that he pleaded guilty to possessing two bombs.

“McLoone and Doyle were caught with one bomb, althought Doyle got an extra six months as he had previous terrorist convictions.’’

Prison sources say tensions are high between McLoone and Cassidy behind bars.

“Cassidy is livid. He thinks that if McLoone had kept quiet then the PPS would not have reviewed his sentence.’’

McLoone, of Abercorn Road, Doyle, of Bluehill Gardens, and Cassidy of Glenfada Park had pleaded guilty to having the improvised device with intent to endanger life.

Belfast Crown Court heard that on September 26, 2011, police stopped a blue Citroen Picasso car on the Buncrana road in Derry following a covert surveillance operation and found the pipe bomb.

” Mr McLoone was the driver and owner of the vehicle; Daniel Doyle was the front seat passenger and Mr Cassidy was the rear seat passenger,” said a Crown lawyer.

Cassidy claimed that while out for a walk, he found the device in the middle of Elagh Road, picked it up and wrapped it in his tracksuit top and was on his way to see a local priest when McLoone gave him a lift.

All three later claimed that they were on their way to “hand it in”.

“Suffice to say that does not tie in with the movements of the vehicle on the evening in question,” said the lawyer

A DNA sample was taken from Cassidy and it matched a sample recoverd from a bomb found in Derry’s Bishop Street six months earlier.

On March 27, 2011, a series of phonecalls were made warning them of a car bomb outside the Bishop Street courthouse.

One caller gave a recognised codeword and said :’The bomb will go off at 7.30 pm’.

Police found a stolen car at the scene and an “explosives dog examined the car and gave a positive indication”.

The Army bomb squad later made the viable device safe which contained a a Timer Power Unit (TPU) and 50 kg of explosives inside a beer keg.

Dnaiel Doyle was jailed for eight years in 1990 for possession of explosives, firearms and ammunition after police raide his home and found a “carefully constructed hide” that contained the explosives and firearms.

The court heard that Doyle “then went on the run” for some time before being arrested, convicted and sentenced.


One Response to REVEALED: DISSIDENT BOMBERS IN JAILHOUSE ROW OVER SENTENCES