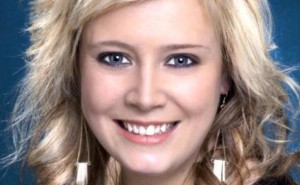 A popular Cool FM DJ has revealed how a bogus taxi driver stole £200 from her after making off with her handbag.

Mairead Campbell yesterday (Saturday) told followers on Facebook how a night out on Friday with friends ended in horror as a crooked driver plundered her account by buying goods online.

She said: “So tonight I learnt a harsh lesson.

“I left a venue in Belfast with friends who were planning on having a few more drinks at a friends house.

“I jumped into a taxi and when we pulled up outside the house, I asked if I could nip in to grab bits and pieces before being dropped across to my house.

“The taxi man agreed and so my friend gave him £15 to take me home.

“I jumped out of the car, leaving my bag on the back seat as I only planned on being a couple of minutes.

“When i returned the taxi had left. My phone, money, bank cards, driving licence and passport were stolen.

“I went to the police station and in that short period of time £200 from one of my accounts had already been spent online and of course the phone was off!’’

However, the former City Beat DJ was full of praise for the PSNI.

“The police were BRILLIANT,’’ she posted.

“They really helped me out by helping me cancel both cards immediately and report my phone as stolen to my service provider.

“But seriously, there are some real scumbags out there! Lesson learnt, I’m glad I only had a few drinks tonight!’’

Mairead said the car that picked her up was displaying taxi plates.

“There was no taxi sign on the roof. I just got into it outside the venue we were at.

“But there were plates displayed otherwise I definitely wouldn’t have got in.

“The PSNI said it was more than likely that they were fake, ‘’ she added.