HUNDREDS MUCK IN FOR A GREAT CAUSE

IT’S that time of year again when hundreds of competitors sign up to get down and dirty for charity at the muckiest event in Northern Ireland. 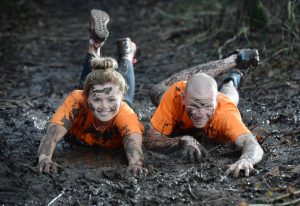 Back by popular demand, the McVitie’s Jaffa Cakes Mud Madness race is taking place on Sunday April 13 at Foymore Lodge in Portadown and will see competitors run, crawl and belly-flop their way across four and half miles of bogs and ponds, under cargo nets and through water sprays and muddy trenches.

Competitors taking part are being asked to help raise funds for Marie Curie Cancer Care, the official charity partner of the event.

Last year saw a record 1,000 participants from Northern Ireland, Republic of Ireland, England, Scotland, Germany and the United States of America take part in the wacky race and event organiser Johnny Davis said this year’s event has been the most popular to date.

“McVitie’s Jaffa Cakes Mud Madness is the ultimate off-road challenge and is one of its kind in Northern Ireland with participants racing through the muckiest fields, bogs and ponds in the country,” said Johnny.

“We have been inundated with interest for the event this year with race spaces being snapped up faster than ever before,” he said.

“Each year we try to improve the course and add new obstacles so I am really looking forward to welcoming this year’s runners. I can guarantee they will have a muddy good day out regardless if they’ve been taking part in the event for the last few years or if they are a first time competitor,” he added.

Tim McAuley, NI Account Manager for McVitie’s Jaffa Cakes is delighted to be involved in such a fantastic event.

“This is the sixth year that we will be supporting the Jaffa Cakes Mud Madness race. The race is a great fit for the brand as Jaffa Cakes are well known for re-fuelling athletes. They’re high in carbohydrates, have one gram of fat per biscuit and taste great so they are perfect for this muddy, fun-filled event,” said Tim.

“The event is fantastic fun and I’d encourage anyone who is looking for an alternative day out to join in on the muddy madness and I also hope the runners will go that extra mile to help raise funds for the charity partner Marie Curie Cancer Care,” he added.

Suzy McIlveen Marie Curie Cancer Care’s partnership manager for Northern Ireland says the race is one of her favourite events of the year.

“We’ve been involved with Mud Madness for the last couple of years and the event has been getting bigger and better each year. Last year, runners raised more money than ever before and we are hoping to raise the bar even further for the 2014 event,” said Suzy.

“We have a fundraising target of £30,000 for this year’s event and I hope all the participants will help us reach this target. The money goes a long way in helping to support Marie Curie Cancer Care in Northern Ireland,” she said.

“The charity provides high quality nursing care, totally free, to help people with terminal cancer and other illnesses so your fundraising money will certainly go towards a worthy cause,” she added.

McVitie’s Jaffa Cakes Mud Madness 2014 will take place at Foymore Lodge in Portadown on Sunday April 13. Entry price is £27 plus an online processing fee. Competitors must be aged 17 and over. Participants can enter online at www.jaffacakesmudmadness.com.

Prizes will be awarded to the first, second and third male and female individuals and teams. There is also a prize for the best fancy dress costume and spot prizes.


2 Responses to HUNDREDS MUCK IN FOR A GREAT CAUSE