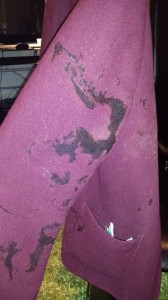 A schoolgirl’s blazer following the sectarian attack in north Belfast

DUP Oldpark councillor Gareth McKee said nationalist youths board the girls school bus around 3.45 pm and pelted the pupils with eggs before stealilng some school work.

The incident happened on the Oldpark Road.

Said Councillor McKee: “Along with my party colleagues Councillors Guy Spence, Lee Reynolds and Brian Kingston, we have spoken to a number of pupils who were victims of this disgraceful sectarian attack, along with their parents and the PSNI.

“This full double-decker school bus had just left the Girls Model School and was taking pupils home to the Greater Shankill area.

“The attack was carried out by 5 or 6 older teenagers described as being around 18 years old.

“Some got onto the bus through the rear fire exit and threw eggs at pupils on the bottom deck causing pupils to rush screaming to the front of the bus, with pregnant girls among those caught up in the crush.

“The nationalist attackers shouted sectarian abuse at the Protestant school girls as they carried out the attack.

“Some girls were repeated hit with eggs. First year pupils were particularly terrified by this horrendous ordeal.

“The attackers took a folder of school work off one pupil and ran off with this.

“Another pupil had to get off the bus to retrieve this and she was pelted with more eggs. Some pupils think that their uniforms have been ruined.

“It is reported that the identity of some of the attackers are known.

“We appeal to anyone who can assist the police investigation into this disgraceful attack to pass on whatever information they have.

“These cowardly bully-boys must be brought to justice. We appeal for calm and for no escalation. We will be maintaining contact with the senior PSNI officers, with Translink and with School management over the coming days as we seek to maintain calm in the aftermath of this appalling incident.”

Anyone with information about the attack is asked to contact police at Tennent Street PSNI on 0845 600 8000.