DISSIDENT REPUBLICAN JAILED OVER BIGGEST TERRORIST ARSENAL IN A DECADE 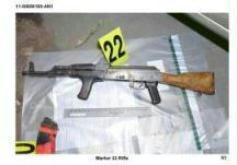 A self-confessed dissident republican terrorist arrested in the wake of the murder Constable Ronan Kerr was today sentenced to ten years for having a stockpile of weapons and explosives.

Gavin Coyle (36), of Culmore Park, Omagh, Co Tyrone, pleaded guilty last month to membership of a proscribed organisation, possession of explosives with intent to endanger life and possession of assault rifles and ammunition with intent between October 31, 2010 and April 6, 2011.

The weapons, explosives and other terrorist matrial were found in a lock-up garage in coalisland, Co Tyrone by Serious Crime Branch detectives investigating the murder of PSNI constable Ronan Kerr on Saturday, April 2, 2011.

Police say it was the biggest arsenal of weapons and explosives seized by police in Northern Ireland in a decade.

Constable Kerr was killed by an undercar booby trap bomb which exploded under his Ford Focus car as he about to leave his home in Omagh and go to work.

Prosecuting counsel Ciaran Murphy QC said that the three cars – a Seat Leon, a Vauxhall Astra and a Ford Focus – had all been stolen from a car dealer during a robbery in the Toomebridge area of Co Antrim in September 2010.

He told deputy Belfast Recorder Judge Corinne Philipott QC that the Ford Transit van had been hijacked in Toomebridge in November 2010.

The prosecuting counsel said that inside the grey Seat Leon car a police officer found three AK47 assault rifles in the rear passenger area along with a magazine wrapped in black tape and attached to it were a number of rounds of ammunition.

A black plastic was also found to contain loose rounds of ammunition.

The court heard that a fourth AK47 assault rifle was found in a toilet block within the complex.

Crown counsel said that Army Technical Officers (ATO) were tasked to the scene along with senior police officers.

The court heard that under the bonnet of the Ford Transit van police found further rounds of ammunition.

Mr Murphy said that the ATO examined all four vehicles and recovered items which contained explosives. Also uncovered was a Cuba cigar case which was found to contain black powder.

“The assault rifles dated back to the 1980s,” said Mr Murphy.

The court heard that Coyle, who was a welder by trade, was linked to the arms find through DNA evidence and also by PETN and RDX explosives residue which was found on his clothing.

Judge Philpott heard that a witness told police that sometime in either 2009 or 2010 Coyle said to him: “I’m in the ‘New IRA’.”

Mr Murphy said that Coyle was arrested at his home in Culmore Park, Omagh under Section 41 of the Terrorism Act on April 8, 2011, and taken to the serious crime suite in Antrim for questioning.

The prosecutor added: “From April 8 to April 16 he was interviewed and the relevant evidence was put to him. He made no reply to the questions. He did give a prepared statement about his movements on the relevant dates.”

Defence counsel Greg Berry QC said that Coyle had pleaded guilty even though there was “contestable issues in the case” relating to the forensic evidence.

“He should be given credit for his guilty plea. He has now shown remorse by a plea of guilty,” added Mr Berry.

“You have admitted your membership of what you describe as the ‘New IRA’.

“The amount of explosives and ammunition and guns that were found in this case makes this a very serious find.

“It is very fortunate that the police discovered these items before they could be put to use.

“Regarding the firearms, the Ak47s are of some considerable vintage. It looks on the face of it that these weapons have been re-activated.

“You were keeping or assisting in keeping these explosives and weapons for the purpose of enabling somebody else to use these weapons and explosives.”

The judge added that if Coyle had have contested the case that the starting point would have been a sentence of 14 years.

However, Judge Philpott said she was taking into account his guilty plea and the fact that there were forensic elements in the case which could have been contested.

Coyle was sentenced to six years for membership of a proscribed organisation, namely the ‘IRA’.

All the sentences, said the judge, were to run concurrently.

Under Section 40 of the Counter Terrorism Act, Coyle was ordered to serve a notification period of 15 years.

Following his release on licence in five years time, the notification period will run for a further ten years.

Judge Philpott added: “In my view that is necessary for the protection of the public in the future. It is important that the police know of your whereabouts.”

Prosecuting counsel also asked for the destruction of all weapons, explovies, and related material found in the lock up. However, he said that that the four stolen vehicles should be returned to their legal owners.

The judge granted the destruction order on the arsenal, adding: “Make sure they are really destroyed this time.”