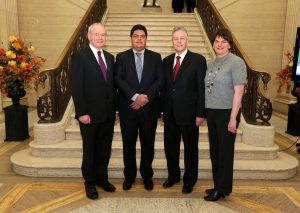 They were accompanied by Enterprise Minister Arlene Foster MLA at the meeting in Stormont with Mr Molina and Tony O’Neill, New Business Director at Moy Park.

The meeting was organised during Mr Molina¹s visit to explore development plans at Moy Park, part of the Marfrig Group since 2008.

The meeting follows discussions with Marfrig during last year¹s visit by the three ministers during their business missions to Brazil.

Mr Robinson said: “Marfrig is already a substantial investor in Northern Ireland and its support has enabled Moy Park to become one of our biggest private sector businesses, with annual sales in excess of £1 billion.

“The recent decision to move its European headquarters to Craigavon was a major endorsement of Northern Ireland as a world class manufacturing location for international companies in food and other sectors.

“The Northern Ireland Executive continues to encourage and assist this immensely impressive company to expand its processing operations and R&D investment here.

“Invest Northern Ireland is already working with the company across a range of projects designed to enhance its overall competitiveness especially in markets outside Northern Ireland.

“Today’s meeting provided another important opportunity to discuss the potential for future growth and investment by the business in Northern Ireland.”

Mr McGuinness said: “Moy Park¹s strategic focus on export market-led innovation is fully in tune with the Executive¹s Programme for Government which aims to transform our economy, into a private-sector driven economy,through support for innovation targeted at international markets.

“Significantly Moy Park is now an integral part of Marfrig, one of the world’s most successful businesses. Marfrig¹s achievements in the global marketplace show how a business can prosper through a commitment to growth through continuous investment in its facilities, products and people.”


One Response to MINISTERS DISCUSS INVESTMENT AT MOYPARK WITH MARFRIG CHIEF