FOUR DISSIDENT REPUBLICAN SUSPECTS JAILED FOR HAVING GUN AND AMMO 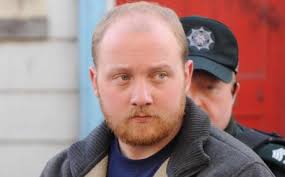 FOUR men caught in a car with a gun and ammunition following a police surveillance operation into dissident republican activity were today (Monday) sentenced to a total of 36 years.

Turnbull, of Strule Park, Omagh, Co Tyrone, also pleaded guilty to further counts on the same date of possessing a Sterling sub machinegun and ammunition with intent along with articles likely to be used in terrorism.

Mark McGuigan (29), of Sperrin View, Omagh, was found guilty at his trial last November of possessing a firearm with intent.

The four were caught in a Ford Fiesta car on October 11, 2010 on the Goritcashel Road outside Omagh, Co Tyrone.

In a green Celtic holdall police found a reactivated . 38 Webley revolver hidden in a sock.

Belfast Crownn Court had earlier heard that inside a second sock was a quantity of ammunition, including 13 rounds of .22 rimfire rifle cartridges and 20 rounds of 9 x 19 mm calibre cartridges.

Judge Corinne Philpott QC sentenced McGuigan to a 12 years, with six years in custody and a further six on licence.

The judge said: “McGuigan still denies responsibility for his actions. He has shown no remorse and does not regret his involvement.

Judge Philpott sentenced Turnbull to nine years, with four and a half years in custody and the remainder on licence.

The court had heard that the day after their arrests on October 12, police carried out a search at 5 Mill Cottages in Greencastle, Co Tyrone and found a three-door Renault Clio car belonging to Darren Turnbull parked outside.

McLoone, whose DNA was found on a Celtic bag, was sentenced to eight years, with an equal 50/50 split between custody and licence.

Before sentencing him, the judge had been told that McLoone had applied to join the dissident republican wings in the jail.

McCallion, who the court heard has distanced himself from dissidents in the jail, was sentenced to seven years, with three-and-a-half years in custody and the remainder on licence on his release.