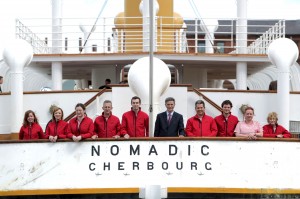 Nightrider: Mountain Biking by Moonlight, Castle Ward, Strangford, Co. Down, January 23 and February 6 & 20. Have a go at the fun and quirky activity of mountain biking by moonlight on the bike trails around Castle Ward. Top quality mountain bikes and lights will be available.

A Musical Evening of Song and Dance, Ardhowen Theatre, Enniskillen, Co Fermanagh, January 25. Following a sell out concert, St. Mary’s and Ballyreagh Silver Bands are back with another evening of music with the aim of bringing communities together. This year the bands are joined by compere Sean McCaffrey and conductor Stephen Crooks.

An Evening of Popular Music with local band Crush, Square Box, Ranfurly House Arts & Visitor Centre, Dungannon, Co. Tyrone, January 25. Family band Crush’s mix of popular songs and original material makes it one of the most popular bands in NI and earlier last year it supported the number one selling UK group The South on tour.

Ulster Orchestra: Burns Night Celebration featuring Eddi Reader, Waterfront Hall, Belfast, January 25. The Ulster Orchestra has put together an evening of traditional music in partnership with the Ulster-Scots Agency. It will feature music by acclaimed Scottish singer-songwriter Eddi Reader who is well known her interpretations of the songs of Scotland’s national poet.

Learn to Kitesurf, NI Kitesurfing School, Ards Peninsula, Co. Down, January 25. Learn to kitesurf in a structured and safe environment with Northern Ireland’s only dedicated school. All equipment provided on the day.

Adult Pony Camps, Tullynewbank Stables, Glenavy, Co. Antrim, January 26. These camps are a great way to refine a skill or to learn something completely new about equestrianism. Remember to bring a warm jacket and your riding boots.

Way Back Then, Millennium Forum, Co. Londonderry, January 26. Local entertainers come together for a special 50th anniversary show to commemorate one of Bishop Daly’s famous Sunday night variety concerts. Featuring the talents of the Foyle Showband and the ex- Rosemount Boys School Choir.

The Story of Belfast, Falls Road Library, Belfast, until February 13. An exhibition exploring the development of Belfast from pre-Christian times until the present day and recount how the city grew from a small settlement into a major industrial city in the late 1800s and how it became a world leader in heavy industry including shipbuilding, engineering and textiles.

Jan Powell’s Plathian Mythologies, the Market Place Theatre and Arts Centre, Co. Armagh, until February 15. Jan Powell is an artist from Armagh who has exhibited throughout NI from the early 1980s. Her exhibition ‘Plathian Mythologies’, made up of 84 works, is inspired by the poetry of Sylvia Plath.