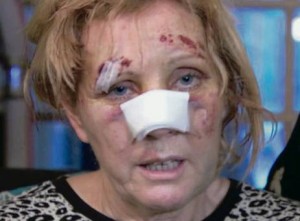 A sex beast that was part of a three man gang that viciously tried to rape a woman in North Belfast last year is believed to be on the run in the Republic.

The Sun newspaper revealed today that the sex beast who left Donna Hawkins, 51, for dead is believed to be hiding out in Donegal.

The mother suffered a series of sickening injuries by the gang of three men.

She was sexually assaulted, suffered a fractured cheekbone, broken nose and cuts and bruises when the attack took place in November last.

The woman has urged the women of the northwest to remain vigilant over fears the brute might strike again.

She told The Irish Sun, “I’ve been told one of the suspects might be hiding out somewhere in Donegal.

“They don’t know where but it is believed he’s somewhere in Donegal.

“If that’s the case I would appeal to woman in that area to remain vigilant, so long as this man is out there every woman is in serious danger.

“I still have nightmares about the attack, the only reason they didn’t rape me is because they couldn’t get my clothes off.

“They kicked me from head to toe when I was lying on the ground.

“They only left me alone when I stopped screaming.

Gardai have also been made aware of the suspects possible location.

A senior source said:, ” Detectives are aware this suspect might be living in the North West.

“He hasn’t been charged with anything yet but Gardai are liaising with the PSNI.”

The woman thanked her friends and family who have rallied around her since the appalling attack.

“I have received great support from all sections of the community.

“My family and friends have been fantastic and I know I face a long road ahead of me,” she added.