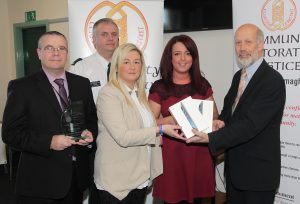 There he met Ewan Morgan, Development Worker, Sinead Ennis and Elizabeth Kimmins, Project Co-ordinator – winners in the recent Justice in the Community Awards.

With their £500 prizemoneythe group purchased two new mini i-pads which will be used to enhance the communications network for their volunteer support co-ordinators in the Newry area.

Included in the picture is Constable Alan McCartney, representing the PSNI who nominated the group for the award which recognises individals and teams, voluntary workers and staff working within community and statutory organisations across Northern Ireland.