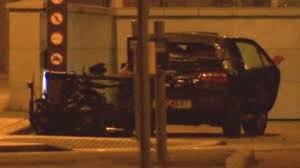 DETECTIVES from the PSNI’s Serious Crime Branch have arrested a man has been for questioning over a botched bomb attack in Belfast city centre last year.

The 27-year-old was arrested in the Belfast area on Wednesday and taken to the serious crime suite in Antrim to be quizzed over the failed attack.

Only the detonator in the 132 lb keg bomb partially exploded inside a hijacked Renault Laguna car.

The owner was forced to drive his car from the Ardoyne area to the entrance to Victoria Square shopping centre car park on Sunday, November 24.

As Army bomb disposal experts prepared to examine the car, the detonator only partially exploded

Fortunately, no one was injured in the dissident republican bomb attack.