SINN Féin MLA Gerry Kelly has received an informed warning from police after jumped on the front of a PSNI landrover last summer.

The former Old Bailey bomber was videoed trying to stop the landrover as it took away a republican protestor to custody for questioning.

It followed an incident after a contentious Orange Order parade in north Belfast during the summer.

Gerry Kelly confirmed he had received an informed warning from the PSNI over hiis “standing with the community in Carrickhill”.

Mr Kelly was criticised by unionist politicians as “reckless” after he stood in front of the landrover to try to speak to police about the arrest of a young man.

He grabbed onto the front grill of the landrover before being carried out down the street.

He added: “I believed at the time I did the right thing,” Mr Kelly said.

“I was part of calming a very difficult situation. I have always believed that this is a matter which should not be brought before the courts.”

In July, after his interview by police, the Sinn Fein MLA said: “I have no regrets over the incident.”

Footage of the incident showed the assembly member being carried along the bonnet of a police land rover after the event on Friday 21 June.

Mr Kelly, 60, a member of the Policing Board, was watched by millions around the world trying to halt a police landrover as it tried to leave the area around Carrick Hill during a republican protest against the Orange Order parade through the area.

After first trying to stop the landrover with sirens sounding, Mr Kelly is seen grabbing onto the grill of the vehicle as it again tried to leave the scene. He was then carried a short distance before it stops. 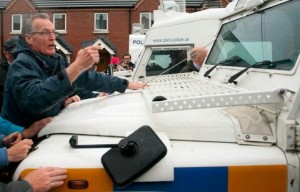 DUP Deputy leader Nigel Dodds said Gerry Kelly should not “escape the full rigour of the law” for his actions at Friday’s Tour of the North parade.