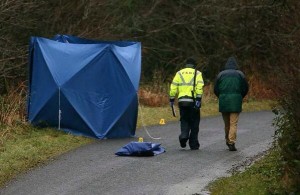 PSNI officers at the scene in Belleek on Sunday following a hit-and-run death. Pic: John McVitty

A male suspect has been arrested following the hit-and-run death of a man in the early hours of Sunday.

Garda detectives arrested the man, who is in his 40, in the Pettigo area of Donegal hours after the death in Co Fermanagh.

The 55-year-old victim died following the incident which occurred around 2.50 am on the Tullychurry Road in the townland of Leggs, near Belleek.

PSNI detectives had earlier said they wanted to trace a blue Ford Focus.

It asked the public to keep a look out for the car which officers believed would have damage to its front.

The suspect was taken to Ballyshannon Garda station.

As part of its investigation, Gardai also seized a blue Ford Focus car.

The victim, who has not yet been named, lived not far from where he was killed.