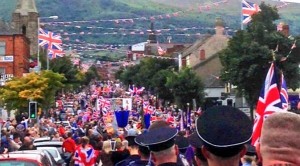 EXCLUSIVE: LOYALISTS are planning a showdown meeting on Sunday with Orange Order chiefs after secret talks with Sinn Fein were rumbled.

But details of the meeting were uncovered on Thursday by protestors at ‘Camp Twaddell’ which was set up after the July 12 Ligoniel parade last year was banned from walking past the Ardoyne shop fronts.

A well-placed loyalist source has now told Belfast Daily: “A showdown meeting is being planned for Sunday in Ballysillan.