EAST BELFAST RESIDENTS ON HIGH ALERT TO EVACUATE OVER FLOODING 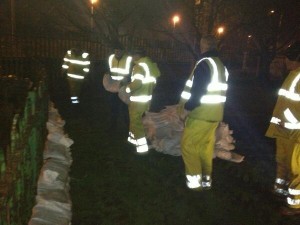 THE people of east Belfast are on high alert on Friday morning for potential flooding.

On Thursday, they were advised to put valuables safely away on the second floor of their homes.

And they were also told to pack a suitcase in case they needed to evacuate their homes at a moment’s notice.

Weather forecasters are warning that heavy rain and winds are on their way to batter the coastal areas of Northern Ireland on Friday.

And those living in the Sydendam area of east Belfast and the docks area of north Belfast could be at high risk of flooding.

The Met Office has issued a yellow warning for rain, high winds and high tides on Friday.

A multi-agency group, headed up by the PSNI, has been set up to co-ordinate a plan of action ahead of an expected tidal surge at midday on Friday and over the weekend.

It is feared that predicted heavy rain may also lead to flooding in Belfast.

Coastguard teams in Antrim and Down have been put on standby amid fears of flooding in a number of areas including Newcastle.

Head of PSNI Operational Support, Assistant Chief Constable Stephen Martin said: “The combination of heavy rain, strong winds and high tides beginning tomorrow and lasting throughout the weekend has created the potential for flooding in a number of coastal areas across Northern Ireland.

“There is the potential for flooding in Belfast. Areas identified as high risk at this time are Sydenham and around the docks area.

“We would ask residents in Sydenham to consider making preparations for potential flooding in the area. We will be working to provide assistance for those who may be affected.”

Other areas that could be affected to lesser extents include Larne, Newry, Newtownards and Clough, all County Down.

In east Belfast, Victoria Park in Sydenham has been closed by Belfast City Council over fears of public safety due to flooding.

The PSNI has urged people to stay way from coastal paths and walkways and to drive with extreme care.