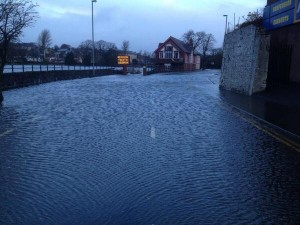 Road closed in Coleraine over flooding

THE expected floods from a high tides in parts of Belfast never materialised on Friday much to the relief of residents.

However, other parts of Northern Ireland along the Co Down and Antrim coastlines were not so fortunate.

Police and emergency services were on high alert for the past 24 hours after weather forecasters warned warned of a possible tidal surge hitting east and north of Belfast.

The underground car park at Belfast’s Victoria Square shopping centre was closed with a notice warning drivers it was because of the “flood alert”.

The car park – which was at the centre of a recent dissident republican bomb attack – later reopened after the tidal surge passed.

PSNI teams along with multi-agency task force built walls of sandbags in parts of central and east Belfast.

But when the tide peaked in Belfast around 12.10 pm the water levels had already started to fall.

There was flooding in Holywood, Millisle, and the main Newtownards to Portaferry coastal road has been closed.

On Thursday, police chiefs warned that parts of the Sydenham area of east Belfast could bear the brunt of any tidal surge.

Victoria Park was closed over fears it would become a major victim to the flooding.

Residents in the area were even warned to pack a suitcase and be prepared to evacuate at a moment’s notice if the floods came.

P&O ferries between Larne and Cairnryan are due to resume with their 16:30 GMT departures after services had earlier been cancelled. Passengers are advised to check updates on their website.

Stena Line has also cancelled sailings between Belfast and Cairnryan and Belfast and Liverpool, and all Rathlin Island ferry services have been cancelled for the day.