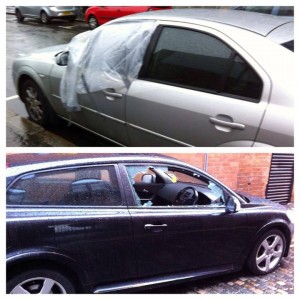 FIRST it was the dissident republican bombers who tried to chase away revellers last month during their Christmas party night out.

Now a vandal gave drivers more than just a sore head on New Year’s Day morning when they woke to find their cars had been attacked in Belfast city centre.

Police are the hunting vandal who smashed windows in eight cars parked in Belfast’s Cathedral Quarter.

Officers have CCTV footage of him caught in the act and hope its circulation among police stations across Belfast will help to identify the suspect.

One of the cars belonged to Derry man Jim O’Doherty who travelled to Belfast for the New Year celebrations.

The wanton destruction happened at Academy Street at about 4.45 am.

He made off in the direction of the nearby Dunbar Link.

One of the car owners, Jim O’Doherty, travelled 75 miles from Derry to Belfast to ring in the New Year.

He said he now faced a difficult journey home.

“I’m going to have to travel back to Derry in the pouring rain. I don’t know if that bit of plastic I’ve put over the car door is going to hold.”

Anyone with information about the attacks is asked to ring police at Musgrave Street PSNI station on 0845 600 8000.