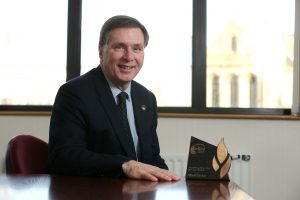 Alan Clarke is pictured with his Honorary Fellowship Award from Belfast Metropolitan College.

THE Northern Ireland Tourist Board is celebrating the achievements of its Chief Executive Alan Clarke who was recently given one of the first ever Honorary Fellowship Awards by Belfast Metropolitan College.

Alan received the prestigious award in recognition of his outstanding contribution to the local tourism economy.

Recognised as a forward-thinking industry leader he was awarded the highest accolade the college can bestow during one of three ceremonies which celebrated the achievements of over 1,000 higher education graduates.

Alan steered NITB through a period of change and high levels of investment, culminating in the ni2012 ‘Our Time, Our Place’ campaign and the global repositioning of Northern Ireland as a tourism destination.

He led the launch of a significant number of additional new tourism facilities, attractions and events across Northern Ireland and paved the way for international events coming to the country for the first time, including the Irish Open, the Giro D’Italia and the recent Derry-Londonderry UK City of Culture celebrations.

“I’ve been fortunate to work alongside Alan since before my time as chairman, and since joining the board of NITB, and have witnessed at first-hand his experience and influence. The contribution he has made to Northern Ireland tourism has been immense.

“Alan has been instrumental in the continuing transformation of our tourism landscape and its impact on the economy. We will feel the benefits for years to come. I am therefore delighted he has been recognised by Belfast Met and on behalf of the NITB board we offer him hearty congratulations.”

Last year Alan received an award from the hospitality industry for his contribution to tourism. Alan was named Hospitality Hero by Hospitality Review NI in recognition of the success of the ni2012 Our Time Our Place campaign and his wider contribution to the Northern Ireland tourism industry which has spanned over a decade.