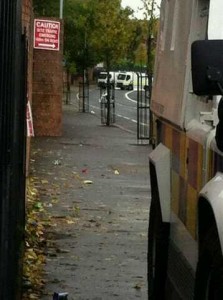 THREE men are to face Belfast Magistrates’ Court on Tuesday charged over a dissident republican gun attack on police in north Belfast.

Three police vehicles were hit with shots from a Kalashnikov assault rifle on the Crumlin Road on December 5.

The men aged 46 and 47 are charged with aiding and abetting the attempted murder of police.

All three are charged with conspiracy to murder.

The men were arrested in Belfast and Lurgan on Sunday.

Two of the police vehicles were towing digital warning signs behind them when the convoy came under fire from the Herbert Street area.

Two of the vehicles and one of the signs was hit by the gunfire.

It is understood those behind the attack built a platform on Herbert Street, from where the shots were fired.