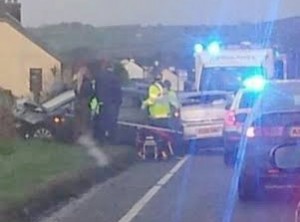 THE main Derry to Strabane road has been reopened following a five car pile-up in which a number of people were injured.

Police sealed off the A5 Victoria Road in both directions following the collision which occurred at Mason Road junction in Magheramason around 4.00 pm on Sunday afternoon.

Traffic was diverted along side roads causing lengthy tailbacks in both directions on the main Derry to Strabane Road.

Emergency services attended the scene and a number of people were taken to hospital. Their conditions are not known.

The road was reopened to traffic at around midnight after police accident investigators carried out a detailed examination of the scene.